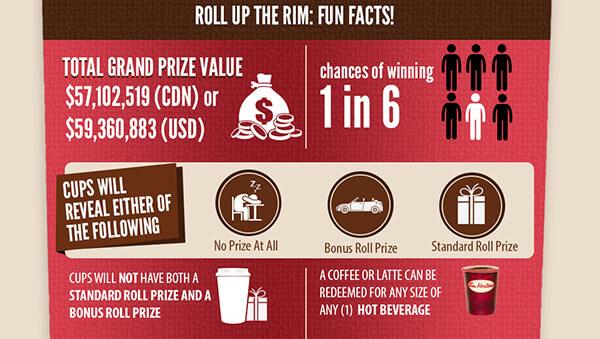 From donuts to cars, java lovers across Canada are rolling up their rims at Tim Hortons this month to see if they’ve won. And, with 50 Toyota Camry’s up for grabs, many Canadians are hoping to have a new set of wheels in their driveway thanks to their favourite cup of joe.

What’s better than a new vehicle? One that’s also considered one of the safest cars on the road! This year’s top prize, the 2015 Toyota Camry, has earned the Insurance Institute for Highway Safety’s Top Safety Pick+ designation. Vehicles with this designation not only protect the driver and the passengers in the car when in a collision, but they also—when outfitted with optional features—can help drivers avoid crashes too.

Roll Up The Rim: A Little Piece of Canadiana

Right up there with the National Film Board’s Log Driver’s Waltz, Tim Hortons’ Roll Up The Rim holds a special place in the hearts of Canadians. The annual giveaway has been around for almost 30 years and shows no sign of losing its lustre. New cars weren’t always waiting under those rims, however. We look at how the campaign has evolved over the years.