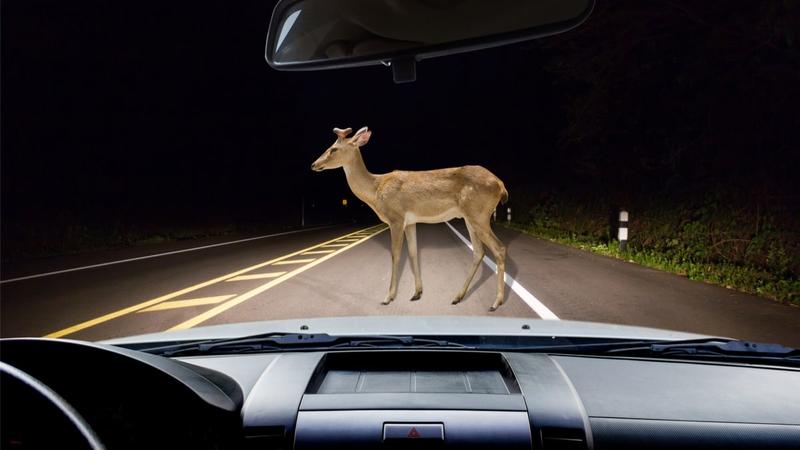 To Swerve or Not to Swerve

I heard of a guy who hit a deer and instead of leaving it on the side of the road, put it in the back seat of his car to take home so he could enjoy some venison. Well, the  deer wasn't dead, and when it woke up it was kicking mad. Next came a frantic 911 call from the driver. I wonder how he explained to the insurance company how the inside of his car got destroyed with out looking like a complete psycho.

A collision with an animal is covered, subject to your deductible, if you purchased comprehensive coverage. But, does that also cover the animal waking up inside your car and destroying it?

If you hit an animal, whether it's a deer or a dog, and put it in your car to take to the vet, will your insurance company cover the cost of cleaning blood off your car's interior, your clothes or other damages? The answer is "yes" this is covered.

For a collision with an animal to be covered, the accident must take place on a highway or road as defined by the Highway Traffic Act. The claim is covered in the section of your policy called "Comprehensive Coverage" and is subject to a deductible. It does not count as an "at-fault" accident and will not affect your insurance rate.

If, however, you swerve and miss the animal, but collide with the ditch or another vehicle, the damage is covered if you purchased collision coverage, and the accident will be considered your fault. The claim will then impact on your insurance.

Even if a kid runs out in front of your car and you swerve to miss the child and hit something else, the insurance company considers you to be at-fault because they have adopted the position that you should be in care and control of your car at all times.

The insurance companies have adopted this position because there have been so many people who have said that something has run out in front of them and caused them to have an accident.

Year Of The Dog

InsuranceHotline.com took 100,000 drivers' records, whether they had tickets, accidents or clean records, and compared the driver's birth year to the Chinese Astrological Calendar

From worst to best, the signs rank as follows:

Rooster - Worst: Sign that has the highest number of tickets and accidents.

Rabbit - Best: Sign that has the least number of tickets and accidents.

To find your sign, look for your year of birth below:

You are an imaginative, charming, and truly generous driver.  You love your car and keep it well maintained. However, you have a tendency to be quick-tempered and be overly critical toward other drivers. Your opportunistic tendencies mean that when your insurance rate goes up, you'll comparison shop. Other Rat drivers: Truman Capote, Wolfgang Mozart, William Shakespeare, George Washington.

You like to try to inspire confidence all around you, even as the traffic piles up behind you. Accidents and tickets also pile up for you, since you're the third worst driver of the zodiac. You are conservative, methodical and good with your hands. So keep a firm grip on the steering wheel!  Other Oxen drivers:  Walt Disney, Clark Gable, Richard Nixon.

You are a sensitive, emotional driver, and your respect for other cars on the road makes you the 2nd best driver of the Chinese zodiac.  However, you have a tendency to get carried away and be stubborn about what you think is right, and you are often seen as a road warrior. Keep in mind that you need to cool your heels when you're out on the road. Save that tiger for your gas tank.  Other Tiger drivers: Judy Blume, Emily Dickinson, Dwight D. Eisenhower, Marilyn Monroe.

You are extremely popular with other drivers because your record is the best of the entire Chinese zodiac. You have a wide circle of family and friends with whom you can carpool. Your sentimentality can lead you to idealize relationships, so don't fall too much in love with your insurance company and get stuck forever with their rates.  You can afford to shop around for a company that will appreciate you. Other Rabbit drivers: Frank Sinatra, Arthur Miller, Robert Ludlum, Christopher Plummer, Tina Turner, Michael Jordan, Brad Pitt, Angelina Jolie, Tiger Woods.

Full of vitality and enthusiasm over your insurance rate because you're the third best driver of the entire zodiac, be careful that your chatty enthusiasm for life doesn't end up slaying you if you try to get into a verbal joust with another driver or a police officer in a curbside trial. You are intelligent, gifted, and a perfectionist but these qualities can be seen as demanding by others. So try to steer away from backseat driving. Other Dragon drivers: Joan of Arc, Sigmund Freud, John Lennon,Florence Nightingale, Mae West.

You've slithered your way right into the middle of the zodiac rankings.  Rich in wisdom, you value a good insurance rate.  You are good at charming your way out of tickets. Avoid procrastination and your stinginess towards money - except when it comes to bargain hunting for the best insurance rates. Keep your sense of humor about life, particularly when someone cuts you off. Other Snake drivers: Liz Claiborne, Charles Darwin, Mahatma Gandhi, Martin Luther King, Abraham Lincoln, Edgar Allen Poe.

You are your own person, very independent and you make good driving decisions. While intelligent and friendly, you have a strong guard against being egotistical, so allow for the stampede of traffic to flow without having to feel as though you need to lead the charge. Other Horse drivers: Davy Crockett,Ella Fitzgerald, Aretha Franklin, Sandra Day O'Connor, Rembrandt, Teddy Roosevelt.

You're right in the middle of the zodiac pack.  Aside from your tendency toward butting heads with your fellow drivers, you can be very charming. You are elegant and artistic, but the first to complain about things, so your road rage needs to be kept in check. Other Goat drivers: Rachel Carson, Michelangelo, Mark Twain, Rudolph Valentino, Barbara Walters.

Because of your extraordinary nature and magnetic personality, you are always well-liked, but with driving, this doesn't always play well for you because you like to cozy up and tailgate. Don't monkey around with your insurance rates.  Rather than being opportunistic, wait your turn at a four-way stop. Other Monkey drivers: Julius Caesar, Bette Davis, Annie Oakley, Eleanor Roosevelt, Diana Ross, Elizabeth Taylor, Harry S. Truman, Leonardo da Vinci.

You are a hard worker, shrewd and definite in decision making, and often speak your mind. Because of this, you tend to seem boastful to others. Don't get into a "coq of the walk" contest with a cop if you're pulled over, though.  Save your crowing for traffic court. Your flashy personality makes you prone to getting the wrong kind of attention on the road, which is why your sign represents the worst drivers of the zodiac. Other Rooster drivers: Catherine the Great, Amelia Earhart, Rudyard Kipling, Groucho Marx.

You are honest, and faithful to those you love. Be careful not to be too loyal to your insurance rates though. Break from the pack and shop around for the best deal.  You are plagued by constant worry, and a tendency to be a fault finder. This can lead to indecision on the road and play havoc with your driving. Other Dog drivers: Cher, Winston Churchill, Bill Clinton, Benjamin Franklin, Jane Goodall, Herbert Hoover, Shirley McLaine, Golda Meir, Socrates.

You have a very strong need to set difficult goals and carry them out. Don't let this include trying to speed through yellow lights before they turn red. Unless you want to live up to your status as the 2nd worst driver of the zodiac. You are sincere, tolerant, and honest but by expecting the same from others, you are incredibly naive. So if you

think your insurance company is going to reduce its rate because you have been with them for awhile, they're not. Other Boar drivers: Lucille Ball, Ernest Hemingway, Albert Schweitzer.