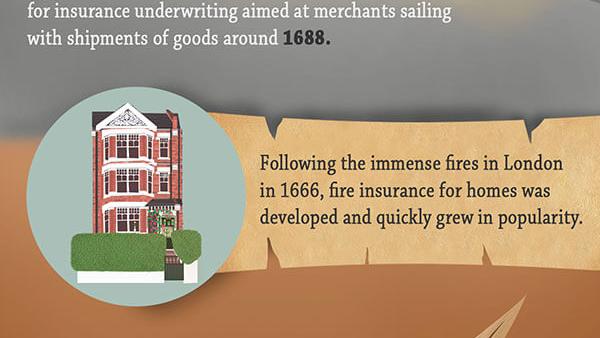 Attention history buffs and trivia masters! Find out what Benjamin Franklin and Sir John A. MacDonald have in common. Yes, it’s about insurance (we are after all InsuranceHotline.com), but what specifically have both of them done, albeit over a century apart?

Insurance has a long history, going back thousands of years. For nearly as long as monetary society has existed, some form of insurance has also existed. The practice of securing investments and protecting finances through insurance has gone through an evolution over time, but it has always helped people to avoid financial devastation due to unforeseen circumstances.

Among the earliest known insurance systems appears in the Code of Hammurabi, in 1780 B.C. This system helped merchants sailing the products across the Mediterranean; lenders would accept an extra fee on debts in return for the promise that the debt would be cancelled should the shipment be lost at sea. A similar system existed in Athens for maritime loans.

The Greeks and Romans both had early forms of life insurance, with the establishment of benevolent societies, guilds that would help pay funeral expenses for members and care for their families. Similar systems later appeared in England prior to the advent of what we know today as insurance.

The Development of Modern Insurance

The first insurances policies, as we understand them today, appeared in Genoa in 1347. The most important aspect of these policies was the separation of the fee paid for insurance from any other contract, such as one for a loan.

In a café known as Lloyd’s, located in London, insurance policies were bought, sold, and underwritten – this was the beginning of Lloyd’s of London. Lloyd’s became a center for insurance underwriting aimed at merchants sailing with shipments of goods around 1688.

Known today as disability insurance, accident insurance first appeared in the 19th Century in response to the unfortunate number of railway accidents. This type of policy is also related to what we now think of as travel insurance.

Canada also saw a founding father as a father of the insurance industry. Sir John A. MacDonald, Canada’s first Prime Minister, was President of The Dominion of Canada General Insurance Company, doing business since 1887. The Dominion, as it is now known, was the first entirely Canadian insurance company offering policies to Canadians. It was predated, however, by Economical Insurance Company, which began doing business in Canada in 1871.

Life Insurance in Canada developed around the same time, with the Sun Life Company beginning operations in 1871. In the 1880s, a guild providing life insurance much like those established hundreds of years before saw a split of it’s Canadian and American divisions. The Canadian Order of Chosen Friends became Reliable Life Insurance in 1943 and remains one of the oldest life insurance companies in Canada.

The History of Auto Insurance

Since the car is a more modern invention, its history has more modern roots as well. Based on some of the same principles of risk established long before, auto insurance developed quickly.

The first auto insurance policy was sold in Ohio in 1897, early in the history of the car. Auto insurance began as mainly a liability policy, and eventually grew to be the comprehensive coverage we know today. Fire and theft coverage first appeared in 1902, and by 1912 policies similar to those we use today were being formed.

The most recent development to strongly affect the insurance industry has been the advent of the Internet. Thanks to online systems, consumers purchase insurance in new and simpler ways. The Internet allows shopping for insurance to be done quickly and with minimal effort, and also allows the immediate purchase of a policy.

Thanks to a competitive insurance market, products have continued to grow and change, with new features that fit the modern world being developed every day. Yet insurance continues to do what it has since its earliest inception – protect us from the unexpected.