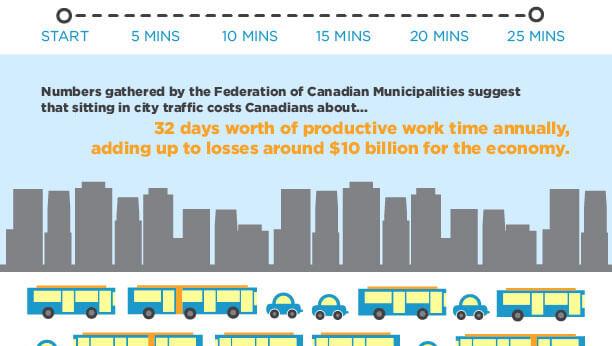 The daily commute to work is an everyday reality for a large number of Canadians. In a 2011 survey, Statistics Canada determined that about 15.4 million Canadians commute to work each day, and of those people 74% drove a car to work. That’s about 11.4 million people driving to work each day across the nation. The average commute varies greatly depending on where you live; not surprisingly, those who commute from outside a major city into the city for work tend to have the longest commute times.  InsuranceHotline wants to know; how does your commute stack up to the national average?

Commuting times can vary greatly across the nation depending on where you live, how far you commute, and the traffic during your commuting time. A shorter commute by distance with a higher volume of traffic may actually see you spending more time in the car than someone with more kilometers to commute but lower traffic volume. The average time spent commuting one-way according to Statistics Canada’s survey in 2011 was about 25 minutes nationwide. But whether that time is spent sitting in gridlock traffic or driving a greater distance at a faster speed depends greatly on where the driver is located.

The majority of commuters are heading into a major city, which means that most drivers spend some time sitting in traffic on the way to work. Numbers gathered by the Federation of Canadian Municipalities suggest that sitting in city traffic costs Canadians about 32 days worth of productive work time annually, adding up to losses around $10 billion for the economy.

Toronto is Canada’s largest city, and a major center to which a large number of people commute every day. Many drivers commute from surrounding cities, such as Mississauga, which is a 54 km round-trip commute, to as far away as Barrie, a 188 km round-trip, adding up to a lot of hours spent on the road. This infographic shows how far these drivers go in an average year. The average commute in Toronto tops the list for major Canadian cities, at 32.4 minutes one-way. This means that those commuting to Toronto – or even within the city – are spending more time commuting than those in any other Canadian city. Nearby cities have similar commute times – Oshawa’s average commute is 31.8, and Barrie drivers average 29.6 minutes.

Another of Canada’s biggest urban centers, Calgary, has an average one-way commute of 27 minutes. As Canada’s fastest-growing city according to Statistics Canada, Calgary is likely to see more traffic and even longer commute times in coming years.

Vancouver and Montreal are both pushing the 30 minute mark, with an average of 29.7 minutes in Montreal and 28.4 minutes in Vancouver. Ottawa’s average one-way commute is 26.3 minutes, and Edmonton comes in close to the national average at 25.6 minutes. All of these major cities have longer commute times than the nation as a whole.

The Cost of Commuting

In addition to the lost productivity due to time spent in the car, commuting also carries a cost for drivers personally. Longer commutes mean more gas usage, and more wear and tear on your vehicle. It may also have some impact on your insurance rates, although this impact is not as large as you might fear.

Long commutes also carry an environmental impact, adding to the emissions being released into the air each day.

For many people, commuting is not optional; you need to get to work, and public transportation is not always a viable option. Fortunately, there are a few things you can consider to reduce your commute time and some of the costs of commuting.

Adjusting your working hours can make a big difference as to how long you spend on the road, if your job allows for flexible hours. Leaving earlier in the morning, or later if possible, can mean less traffic and shorter commute times.

If you can’t adjust your hours, forming a carpool is the best way to cut back on your hours behind the wheel as well as the wear and tear on your car. Carpooling can also reduce the number of cars on the road; if more Canadians carpooled, traffic could eventually be reduced, meaning shorter commute times for everyone.