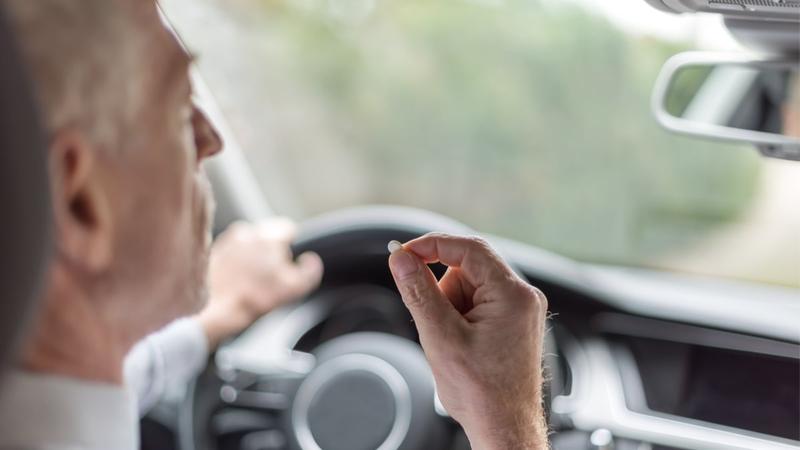 Drugged-driving has become an increasing concern for Canadian law enforcement.

"We are finding more and more people taking illicit drugs, these are prescription and non-prescription drugs, and taking them to excess," says Ontario Provincial Police Sergeant Kerry Schmidt. The Criminal Code indicates that no person shall operate a motor vehicle while impaired by alcohol or a drug (section 249), or a combination of both.

"If we suspect someone is impaired by drugs, there will be a screening process to ensure that it is drugs and not alcohol, or a combination of both," Sgt. Schmidt continues. "If [the officers] have reasonable grounds to believe that the person is impaired by something other than alcohol, [the driver] will be arrested and taken back for testing."

Back at the station, Drug Recognition Expert (DRE) officers will perform "a whole battery of tests on the subject to determine their level of impairment, and then [the officer] can testify to their impairment based on their training and their experience." These include, among other tests, collecting blood, urine and/or saliva samples.

Increased education is beginning to give officers a leg up on the battle against drugged-driving. DRE officers are given specialty training, while other officers specialize in standard field sobriety testing. All training allows officers to better "assess the situation and look further beyond the indicators," Sgt. Schmidt says. But there is still work to be done.

Alcohol impairment remains the easiest to detect and monitor, with a legal maximum limit of 0.08 milligrams of alcohol per 100 millilitres of blood—which is easily measured through a Breathalyzer test. In 2012, 60,000 charges were laid for alcohol impairment versus only 1,000 drug-related charges. However, the government is currently funding studies to better detect the presence of other drugs and to crack down on drugged-driving.

One such study, funded by the federal Department of Justice and Ontario Transportation Ministry, seeks to make recommendations on the intoxication levels of various drugs, leaving it to policy makers to integrate relevant laws into the Criminal Code. It will also look into the efficacy and accuracy of roadside oral fluids tests—with the intention of providing law enforcement officers with additional tools to complement existing testing.

British Columbia has been experimenting with roadside testing to gauge impaired driving since 1995, with specific drug testing in 2008, 2010 and 2012. Findings compiled by the Canadian Centre on Substance Abuse (CCSA) indicate that initially the testing showed a decrease in the amount of drivers who tested positive for at least one substance other than alcohol between 2008 and 2010, but by 2012 those numbers were up again.

Nationwide CCSA findings indicate that between 2000 and 2009, the number of drivers that tested positive for drugs in Canada also increased, including for those drivers fatally injured. This was highest among younger demographics.

"There seems to be this lax view that smoking a joint and grabbing the car keys is okay," said Marc Paris, the executive director of non-profit advocacy group Partnership for a Drug Free Canada, in an article that appeared in the Globe & Mail. He quotes a recent survey that found one third of youth and one quarter of parents thought driving stoned was less risky than driving drunk.

In fact, CCSA found that youth between the ages of 15 and 24 were more likely to drive after using cannabis than after drinking. The trend extends across the country. The Centre for Addiction and Mental Health found that among young Ontario drivers in grades 10-12, 10 per cent reported driving within an hour of consuming cannabis in 2013, versus 4 per cent after consuming alcohol.

"I don’t have the stats in front of me to prove that," Sgt. Schmidt said when asked about the research. "But I wouldn’t be surprised." Media and societal attitudes towards marijuana have shifted, and the Ontario Provincial Police has noticed an increase in accessibility to the drug as a result. "There’s push from different organizations saying they want to have this decriminalized or legalized, but our position is it’s an impairment and we don’t want it being used. It’s certainly causing injuries and deaths on our highways and that is unacceptable."

Drugged-Driving, the Law & Your Auto Insurance

But marijuana is hardly the only problem. Other drugs such as cocaine and an entire industry of prescription pills also need to be taken into consideration. And while the country develops a plan to handle detecting various drug levels, and the police become increasingly educated beyond the more obvious signs of different drugs, one thing remains certain: driving while impaired on drugs is illegal.

If you are convicted of driving while impaired, you risk losing your licence, being fined, facing jail time, and significantly higher auto insurance premiums. Your best bet is to never drive while impaired from alcohol or drugs. This way, you’re not only protecting yourself, but everyone else on the road as well.