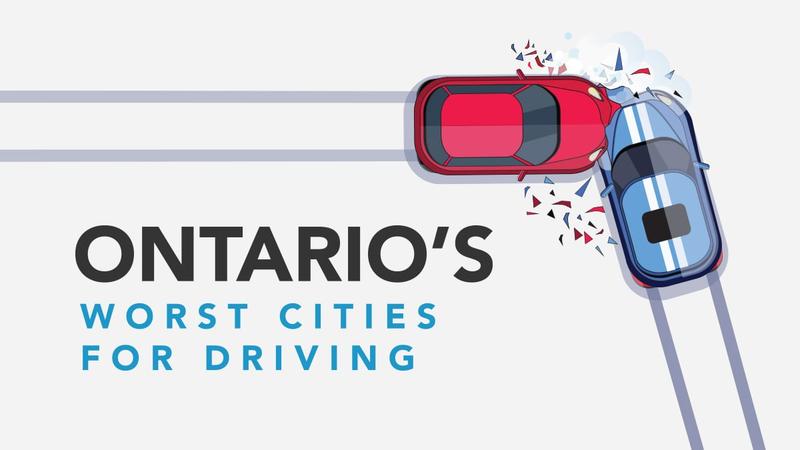 We grade the cities across Ontario based on tickets and collisions of its hometown drivers.

Your driving record and history has a direct impact on the auto insurance premiums you pay. With tickets and collisions on your record, you can expect to pay more for your auto insurance than if you didn’t. It’s a reality that most drivers know and expect.

You might also expect, however, that residents in large urban areas, like Toronto, would report having more tickets on their driving record, on average, as well as collisions. It’s a big city after all with more vehicles on the road and drivers, and thus a greater chance for something to happen.

Yet, according to InsuranceHotline.com this may be a myth. Based on the details provided by shoppers who obtained Ontario auto insurance quotes, you have to look beyond Toronto’s borders to find the cities whose drivers admit to having the most tickets, collisions, or a combination of the two, on their driving record. These are infractions and collisions that could have occurred in the driver’s hometown or anywhere their travels have taken them.

We measured all three categories, and then assigned each city a grade based on its variance from the Ontario average.

The Top 10 Worst Cities in Ontario for Driving

The Top 10 Best Cities in Ontario for Driving

The Lowdown on Tickets

On average, 6.9 percent of drivers in the province admit to having at least one ticket on their driving record while getting quotes. However, drivers in some cities and towns exceed this average considerably.

From a collision standpoint, overall 8.9 percent of Ontario drivers admit to having been involved in a collision in the last 10 years. Yet, there are areas in the province where the average is two full percentage points higher.

Having both a ticket and collision on your driving record is detrimental to your auto insurance premiums and approximately 3.5 percent of Ontario drivers admit to having at least one of each in their relatively recent past. In 13 communities across the province, however, the average is 5.5 percent or higher.

What’s It All Mean to Your Ontario Car Insurance?

Your driving record matters. Your driving record is an influential factor in determining your Ontario auto insurance rate. Sure, there are others like where you live, your insurance history, and the type of car you drive; but your driving record and history is indicative of how you are when behind the wheel. Every at-fault (or partially at-fault) accident or traffic ticket conviction will likely increase the cost of your premiums.

What’s more, traffic ticket convictions affect your insurance rates for no less than three years and accidents stay on your record for at least six! With a less than perfect driving record, you can find yourself paying a lot of extra premium over the years.

Compare car insurance quotes at InsuranceHotline.com from 30+ providers in a single search. Start saving money today on the premiums you pay.