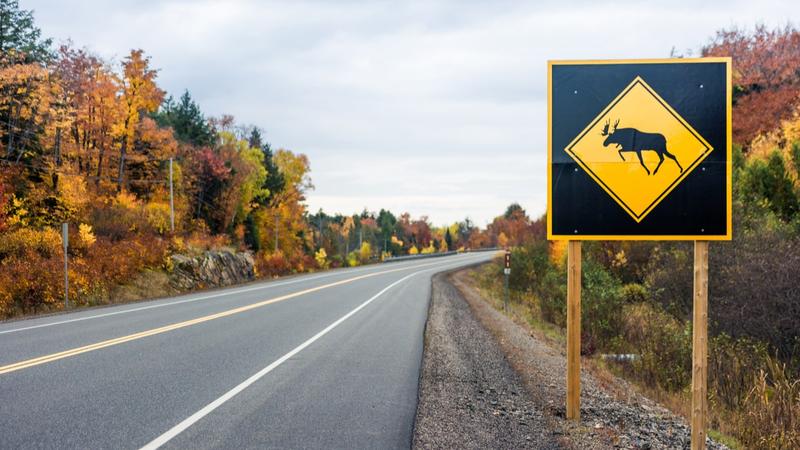 Canada is known for its natural beauty, its mountains and forests, and its plentiful wildlife. And, unfortunately, it is also a place where collisions involving large animals are reported every year — 14,000 in Ontario annually, according to the Ontario Provincial Police. That’s the most in Canada.

Dawn and dusk is when wildlife is more likely to be seen on the roadside. Not only that, but heading into winter, driving conditions can impede visibility and the ability to stop suddenly. And the salt used to melt ice on the road can attract some larger animals who seek it out for its mineral content.

It’s a good time to brush up on some safety tips and precautions, and make sure you have the right car insurance to protect you, especially if you tend to commute through areas where wildlife roams.

Tips for avoiding a wildlife collision

The best course of action is to avoid hitting a large animal with your vehicle in the first place. Make sure to slow down in wildlife-inhabited areas, especially where signs are posted, and mentally prepare for different potential scenarios before they happen, just in case.

Be on the alert for wildlife at all times. According to the Wildlife Roadsharing Resource Centre (WRRC), the most likely situations for collisions with animals are:

Here are 14 ways to minimize your risk:

What to do if you’ve hit an animal

If you can’t stop a collision from happening, your number one priority is to keep yourself, your passengers, and other drivers safe. Don’t swerve into oncoming traffic.

Try to drive toward the spot the animal comes from, not where it is going. Brake firmly and quickly, then steer your vehicle in a way that you will strike the animal at an angle. Letting up on the brake just before you hit the animal will reduce the chances of it coming through your windshield.

Despite your best efforts, if you find yourself in a collision with an animal, the WRRC offers the following tips:

What kind of insurance will cover damage to your car if you hit an animal? Will you be covered for the repair costs for this type of collision or will you be left to pick up the bill?

A collision with a large animal can cause a considerable amount of damage to your car. If you purchased the optional collision and comprehensive coverage when you got your policy, the costs for the damage will likely be covered. Collision coverage provides protection if your car is damaged in a collision with another vehicle, animal, or object, while comprehensive provides coverage for non-collision-related damage claims. Both have a deductible.

Which coverage applies, however, will depend on the nature of the collision:

Remember, these are both optional types of coverage, so make sure to opt in to the right coverage to protect yourself from an unexpected wildlife collision.

Does hitting an animal affect my auto insurance rate?

Usually no, but it depends on your province or territory and the car insurance company. Hitting an animal is generally considered a not-at-fault collision and will be paid for under your comprehensive policy. So, it won’t affect your rate unless you make several claims around the same time.

But if it’s considered a collision — for example, if you swerve away from the deer and hit another car — your car insurance rate could go up. Talk to your broker and make sure you know your coverage and options.