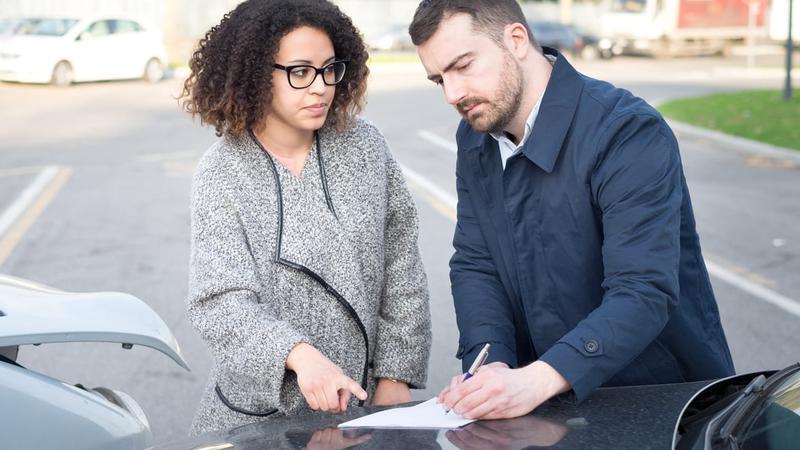 When you have been involved in an accident there are many things running through your mind and among them will be how the accident might impact your car insurance rates. It’s a fear that all drivers who have been in a collision has, but the impact on a person’s rate, if any, will be largely determined by the degree of fault for the collision. Deciding who is at fault is typically the job of the insurance adjuster who will investigate the accident.

At the Scene of an Accident

When accidents happen there is often confusion and people may be quick to place blame. It’s important to keep a level head. Do not admit to or discuss who is at fault for the accident while at the scene. It will only lead to heated exchanges. Instead, focus on recording and documenting the facts. Taking photos and obtaining the names and contact information of witnesses are both helpful.

If any of the other drivers involved are angry or aggressive, it’s best to avoid a confrontation. Keep it civil and simply exchange information and tell them you will allow your insurance company to handle the situation.

The police will need to be called if there are injuries (no matter how minor), if it appears there is a criminal act involved (say a driver appears impaired), or if the collision involves a pedestrian or cyclist. The police will also need to be involved if damages exceed your province’s threshold. In Ontario and Alberta, for example, the threshold is $2,000 (that’s total for the accident not per vehicle involved).

While the police will make a report and may issue traffic violations, they do not determine fault in an accident for the insurance company. A police report will be one of the pieces of evidence used in the investigation of the crash, but it is not the final word.

After an accident is reported the insurance companies involved will begin their investigation. They will take statements from drivers, passengers and witnesses, and look at photographs of the scene, if available, and the damage caused.

When all of the information has been compiled, the insurance company will make a determination as to how the accident happened and what the cause appears to have been. They will then determine who is at fault based on a set of rules.

In Ontario, the Fault Determination Rules are a province-wide set of rules by which all Ontario car insurance companies must abide. The rules are set out in the province’s Insurance Act. In other provinces, insurance companies follow their own fault determination rules, based on previous accidents, which will help them to make accurate decisions. In actuality however, the rules vary little from province to province.

In some cases, an accident may be the result of errors on the part of each of the drivers involved. In these situations, the insurance companies may agree to a shared fault determination. Fault can be determined at 100 percent for one party, 50/50 for two, or any other range of percentages.

When You Disagree With a Fault Determination

As part of your insurance policy contract, you have the right to disagree with a fault determination and appeal the decision. Every insurance company has a procedure in place by which you will be permitted to state your case and offer evidence for why you believe the fault determination to be incorrect. If needed, a third-party mediator will be brought in to hear the appeal and make a final decision based on all of the evidence. All parties involved will have to abide by that decision once it is made.

Providing your insurance company with all of the facts from the start, taking pictures at the scene, and giving detailed and accurate statements can help insurance companies make the right determination. Although it might not avoid all situations in which an appeal becomes necessary, cooperating with the investigation is the best way to ensure an outcome that is satisfactory to everyone.

Some Insurers Are More Forgiving Than Others

If you’ve been involved in a collision and are found to have been at fault, whether wholly or partially, the accident may impact your insurance rates. Each insurer, however, will rate your collision differently. Some insurers are more forgiving than others which is why it’s prudent to shop around for the best car insurance quotes.

1,242 reviews on TrustPilot. See some of the reviews here.

0 years ago Robert Demelo
Powered by