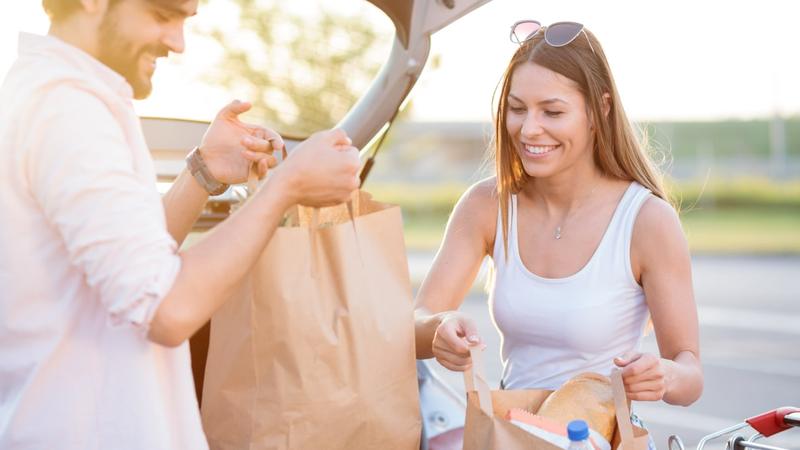 Parking lots are chaotic. You’ve got people driving around looking for the perfect spot, pedestrians coming and going, and drivers pulling into an empty space or reversing out to leave. There’s a lot going on in a relatively tight space which is why parking lot accidents are so common.

Despite what you may have heard, however, fault for a parking lot accident isn’t always split down the middle. It’s treated in much as the same way as another other motor vehicle collision because just like main streets, parking lots have right-of-way rules too.

Right-Of-Way in a Parking Lot

While navigating a parking lot, some drivers may get confused by who exactly has the right-of-way. The best way to determine this is by considering the type of lane you are in because parking lots have two basic types of roads: thoroughfares and feeder lanes.

A thoroughfare is generally a lane that exits to a street. These tend to be wider and are the main arteries of the parking lot. Feeder lanes, on the other hand, are smaller lanes that typically begin and end at the thoroughfares.

Similarly, anyone who is moving out of a parking space must yield to those who are driving through the lane. Akin to pulling out of your driveway onto a street, vehicles in a parking space do not have right-of-way over those already on the move.

Finally, all stop and yield signs trump assumed right-of-way. These signs should be observed in a parking lot in the same way as signs on any street. Failure to obey posted signs could result in an accident for which you may be found at fault for having caused.

On this episode of #AskAnneMarie, insurance expert Anne Marie explains what you should do if you end up in a parking lot accident. Watch the video below and learn more from our #AskAnneMarie episodes! Your insurance questions answered.

One of the most common accidents to occur in a parking lot is one in which a driver is backing (or pulling) out of a space and strikes another vehicle, whether moving or parked. In this scenario, the driver exiting the parking space will usually be found at fault for the collision with one exception: in a case where two cars are backing out at the same time and hit each other, fault is likely to be shared.

Typically, any situation in which you strike a legally parked vehicle will find you at fault. This includes backing into a parked car, striking a car with your door when opening it, or clipping it in the lot. If you hit a parked car and leave the scene without making an effort to contact the owner of the car, it can also be considered a hit-and-run.

If a collision occurs when both cars are on the move, in general, fault will be determined in a similar manner as if the collision occurred on street. If you rear-end another vehicle, for example, or are driving on the wrong side of the lane to get around a car waiting to park, then you would typically be found at fault for the resulting collision.

Just like any accident on the street, insurance companies will take statements and consider damage to all vehicles involved in a parking lot accident to determine fault. They’ll also rely on the fault determination rules, which are predetermined guidelines by which adjusters can quickly determine fault. When it comes to Ontario auto insurance, for example, these can be found under the Insurance Act.

Cooperating and providing accurate information are the best things you can do to ensure fair fault determination. If you disagree with the determination however, you also have the right to appeal the insurance company’s decision. A third-party mediator can be brought in to make an objective decision on the claim.

Cautious driving is the best and easiest way to avoid being involved in a collision but there are other preventative measures you can take too:

Auto insurance rates are increasing and it’s time to put what you pay for coverage in reverse. Lower your car insurance premiums today and compare rates from more than 30 of Canada’s most trusted insurance providers all in one go. On average, last year, shoppers saved $427 after comparing car insurance quotes with us and, in just a few minutes, you could as well.