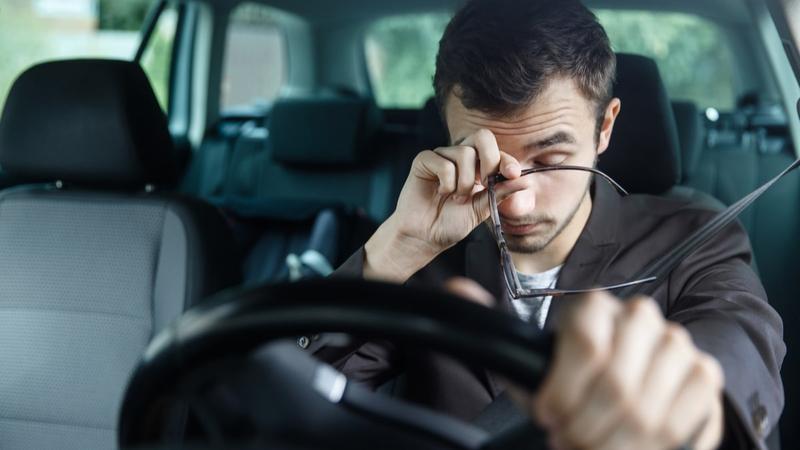 Drivers who miss between one to two hours of the recommended seven hours of sleep nearly double their risk of a crash.

Last week’s Canada Road Safety Week had police out across the country targeting high-risk driving behaviours. Distracted driving, drug or alcohol-impaired driving, aggressive driving, and failing to buckle up were all on the docket for enforcement to encourage compliance.

The police were also on the lookout for motorists who were driving while fatigued.

Drowsy driving is dangerous, and unfortunately, there are a lot of tired Canadian drivers on the road. A Traffic Injury Research Foundation (TIRF) survey (2011) found that 18.5% of people had admitted to nodding off (even just for a moment) or falling asleep at the wheel in the previous year. It’s unlikely much has changed since this survey was last undertaken.

Less sleep equals a greater chance of a collision

Too many Canadian adults sleep less than seven hours a day. A Public Health Agency of Canada publication found that many Canadians are not getting enough sleep. At a minimum, everyone should be getting at least seven hours, but many don’t.

If you don’t get at least seven hours of sleep, sleep deprivation could cause you to get into an accident. In a 2016 study, the AAA Foundation found that sleep-deprived drivers had an increased risk of being involved in a collision compared to drivers who slept for the recommended seven hours or more before getting behind the wheel:

Sleep deprivation similar to being drunk

Sleep deprivation can seriously impair your ability to drive. The study found that drivers who get less than five hours of sleep share the same crash risk as someone driving over the legal limit for alcohol.

"You cannot miss sleep and still expect to be able to safely function behind the wheel," said Dr. David Yang, executive director for the AAA Foundation for Traffic Safety. "Our research shows that a driver who has slept for less than five hours has a crash risk comparable to someone driving drunk."

A 2021 TIRF article on the perils of Daylight Saving Time cites additional research that backs up this claim, which found:

Signs you are too drowsy to drive

When you are drowsy or tired, you are less alert, and your reaction time is impacted. The Ontario Ministry of Transportation notes eight signs that you are too tired to drive:

No matter how much you open your windows or how loud you turn up your radio, you can’t trick your body into staying awake. In fact, you could easily fall asleep behind the wheel without even realizing it. And while caffeine can make you more alert, the effects usually wear off quickly if you’re sleep deprived. Coffee or other stimulants cannot substitute sleep.

Though there appears to be no specific law in Canada that targets driving while fatigued, you could easily catch the eye of the police if you’re driving while drowsy — even if you’re not involved in a collision. If you’re not able to stay in your lane, or if you run a red light or make an unsafe lane change, you can end up with a ticket.

And while tickets come with a one-time fine, they can also affect your auto insurance premium for years to come, as they stay on your driving record for at least three years.

Then, of course, if you’re involved in a collision, the penalties for driving while fatigued are more serious. You could be charged with dangerous driving, careless driving, or even criminal negligence. Don’t risk it; get the sleep you need to drive safely behind the wheel.